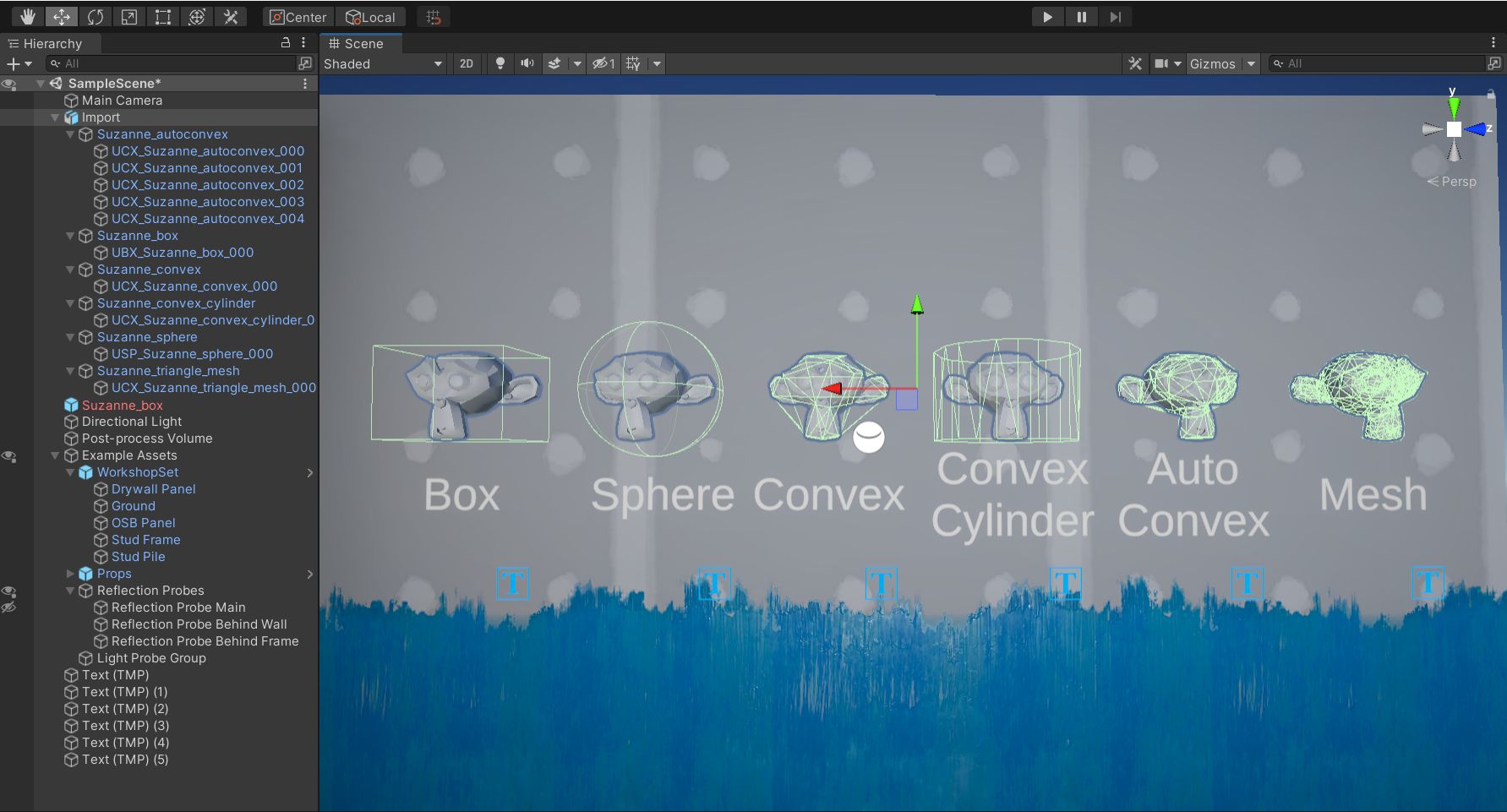 
I can only offer limited support due to my current health condition! Fixes and support messages might take a little longer and I won't have access to my workstation at all times.

What is Collider Tools?

Collider Tools is a Blender add-on to create physics colliders for games and real-time applications. The add-on offers a lot of tools for creating the most common collider types like Box, Sphere, Convex, Convex (cylindrical), Auto Convex (Windows only), and Mesh quickly and easily within Blender. These colliders can then be imported to engines like UE, Unity, and others.

The add-on offers big flexibility and controllability by using the selection, both in Object and Edit-mode, as well as offering settings like global or local space generation. Further, the add-on supports the generation based on both the original mesh (pre-modifier stack) and the evaluated mesh (post-modifier stack). Collider Tools offers functionality for organizing the colliders, showing, hiding, and selecting them and tools to automatically generate multiple convex shapes to represent complex meshes (convex decomposition).

Collider tool removes the biggest obstacle for creating colliders in Blender, its lack of specialized tools and therefore time-consuming process for creating colliders. Collider Tools combines the speed and comfort of in-engine tools like the UE collision tools with the power and flexibility of Blender.

There are reasons for using Collider Tools over in engine solutions:

Collider Tools supports a wide variety of collision shapes and settings to create them. You can find all the details in the documentation. The collider creation works based on the selection, both for Object- and Edit-mode and it includes multi-object Edit-mode support.

Box collisions are simple, efficient, and cover a wide range of use-cases.

Sphere Collisions are the most efficient type of Collision shapes. Sphere collisions are usually represented by a mathematical description (location and radius) rather than polygons. The sphere meshes created by the addon are intended as a visual representation. Sphere collisions will become more expensive if they are imported as convex shapes or mesh shapes.

The sphere generation uses a fast algorithm that does not always provide the optimal result. This happens especially for simple box meshes. The results become better with more complex collisions. Improving or replacing the algorithm is planned for future releases.

Convex shapes are versatile while being efficient. They can be used to represent most objects, especially for engines that don't support triangle mesh collisions

There is no special cylindrical collision type. This is only a tool to help create a clean cylindrical convex shape. Cylindrical shapes are very common shapes, especially in manmade structures. Physics engines will interpret them as simple convex colliders.

Mesh Collisions are the most complex type of collision. Use them carefully, minimize the triangle count as much as possible and use them (only) for static objects.

You can convert any mesh to be a collider as well as any collider to be a regular mesh.

You can convert any mesh to be a collider. The conversion applies the same properties as to other collisions created with the operators from above. The objects will be renamed, added to the collision collection, and can be hidden/selected as all the other colliders.

Collider to Mesh will remove all the collider-specific properties and materials. Convert to Mesh opens a pop-up window to set the new object name. 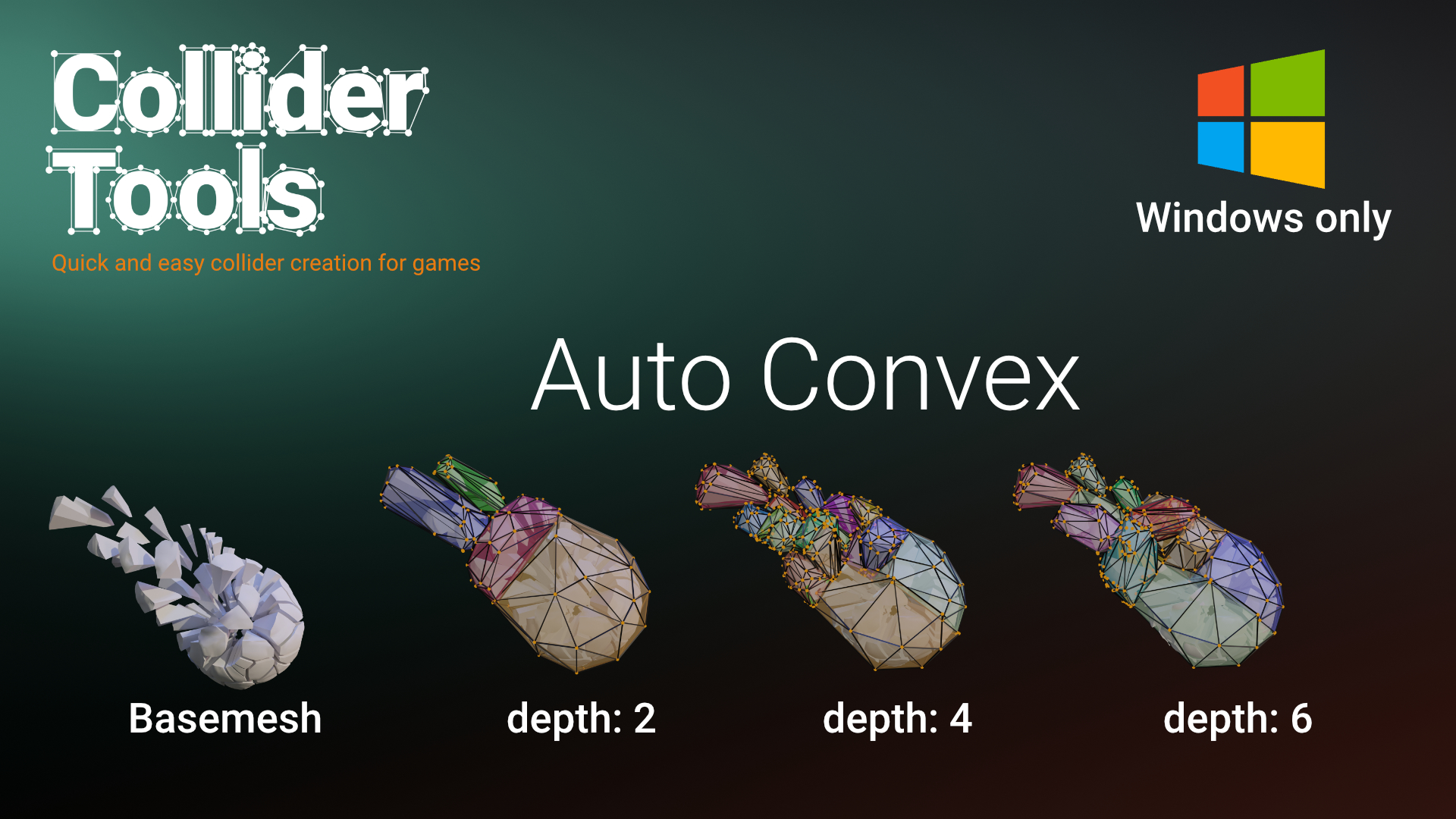 Auto Convex is a helpful tool for generating convex colliders of a complex mesh. It works well for complex, organic shapes, like rocks, statues, rubble, and debris. It is not the magic one-click solution for each asset!

What other artists from the games industry say about collider tools:

Richard Court - Senior Environment Artist | Studio GoboThis is a must-have addon, took all the hassle and tedious work out of creating custom collision. So fast and easy to use, takes care of naming/parenting with support for custom prefixes.

This is something that a lot of people overlook on how much time it can take up on a project. With how intuitive the tool is as well as being able to support much more complex shapes. it's quite impressive how quickly you can get more the useable results.

I am a huge fan of addons that reduce the steps and amount of clicks it takes me to do menial tasks. This addon is one of those. Its simple and clean and will save a lot of time for anyone making collision meshes in Blender for use in game engines like Unreal Engine. I wish I had this addon a lot sooner!

I have been lucky enough to be able to try Collider Tools in the past months and I can tell you that it became directly one of my favorite and most used add-ons. Everything is just so simple and powerful. Now I can create collisions in a matter of seconds for any assets or modular kit and spent all this extra saved time on more creative and fulfilling tasks!

Based on the fact that making collisions is one of the most annoying moments in an art pipeline, I think anyone working in real-time 3D deserves to get through this moment the proper way. That's what this addon allows 😃