It allows you to create physically realistic objects like ropes/wires/cables and chains fast and painless.

You need to animate a dog on leash? Want to have realistic wires in your urban style scene? Or want to create a robot with cables or chains? You can do it all with help of this addon!

It has cool features, friendly UI and is constantly updated.

With this addon you can:
- create naturally looking ropes and chains by drawing them
- create multiple ropes and chains faster
- easily edit their physical properties (you can do that for several objects at once)
- easily change their appearance (e.g. you wanna change rope to hose or use different type of chains, again, you can do it for several ropes or chains at once)
- add and edit effects like wind or turbulence in no time
- create cyclic (e.g. having shape of a circle) ropes and chains
- change materials for chains/ropes (you can do that for multiple objects at once)
- convert curves to ropes/chains
- scatter ropes/chains using particle systems
- group ropes/chains for a faster workflow

How to use it?

The addon is in continuous development and new features will be coming soon. You will get them for free cause THE UPDATES ARE FREE FOR LIFETIME.

Here's the roadmap (* means that the feature will be included in next version):
- allow selection of objects that will be put in the beginning and end of the rope
- addon preferences 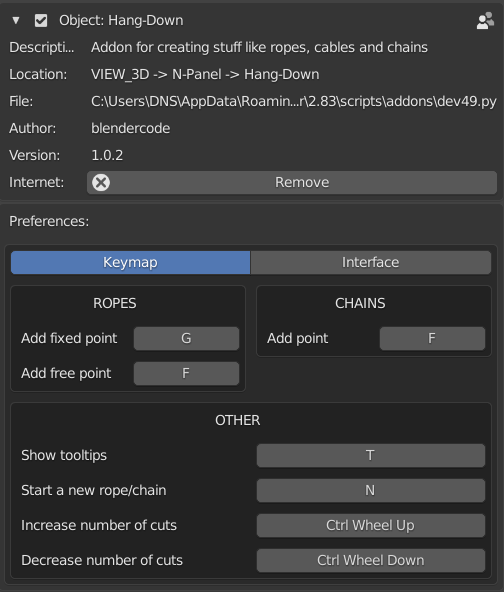 - empty type changing (change fixed empty to free), possibly animated
- make ropes collide with each other (as for now they only collide with other physical objects, but rope to rope collision is not supported)
- freeze ropes/chains (make them static objects)
- randomly scatter ropes/chains between selected objects
- add pendulums

Version 1.0.0, Features:
- create naturally looking ropes
- setup resolution for ropes (in case the rope has more than 1 segment, resolution for each of them can either be the same or can depend on length of the segment)
- setup rope's physical properties
- easily change rope's appearance